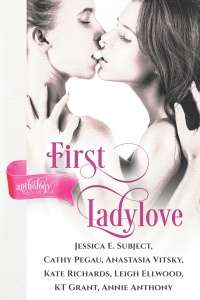 HAPPY BOOK BIRTHDAY! I’m so excited and proud to be part of this collection of seven outstanding stories of #FirstLadylove. Thanks to brainchild and ringleader Kate Richards for getting this project organized and off the ground.  To celebrate the release day, please enjoy an excerpt from Centerfold  by the incredible Kate Richards.

Get married or get nowhere…

Jesse Harrison has passed the Bar and taken up a position as an associate at a prestigious Orange County, California law firm. First in her law school class, she has every qualification for success. But in 1982, her boss’s decree means marry a man. And women attorneys have it hard enough in a world where the glass ceiling is a reality even for professionals who have the nerve to be female and shoot for success Add in the fact she’s a lesbian and her future looks bleak indeed. Its crowded in the closet. She doesn’t want to marry a man. And she’s got her eye on a centerfold.

In the eight years since the California Highway Patrol first began putting women in real law enforcement jobs, they’d come a long way. But were they ready for a woman who loved other women? Officer Elizabeth Knight was not so sure. For the time being, she’d keep her mouth shut and do her job. And if it involved rescuing a sexy motorist whose ancient car overheated on a busy freeway, she’d do it with pleasure. A shame she’d never see her again.

Girl’s night at the Reef…

One night of the week when the lesbians from the Long Beach area can get together and dance and drink and maybe meet someone special. Jesse went every week in hopes of getting somewhere with the gorgeous golden-haired Aurora. But sometimes fate has plans a girl getting ready for a night on the town cannot begin to anticipate.

“So I hear they’re taking it to the next level.”

Anna pushed her into a seat and followed her, whispering, “They are the hot new couple. Carlene’s finally taking her home tonight.” Her Baby Soft cologne—the same thing she’d worn for ten years—was too young for her and a little cloying, like it might be a ten year old bottle of the stuff. Did they still even make it? “I mean to bed. To have—”

“So I know you’ve been eyeing her. Everyone knows.” Jeannie slid into the booth beside her, auburn curls bouncing . She tried not to inhale too deeply. Did her friends bathe in cologne? “Aren’t you going to make a move at all?” Jeannie leaned on her shoulder and nuzzled Jesse’s ear. “You know, I’ll go home with you. We always have a good time.” A good time, sure. But only sex, needs met, and nothing more. What had she been thinking to sleep with her the week before? Even now, her comforter held traces of lipstick and eye liner, and she felt dirty. She shifted to the left, breaking contact between their thighs. The only good point of the evening would be if she could arrange a “chance meeting” with Aurora when she stepped outside to catch her breath. Those brief encounters made her feel alive then, when the goddess stepped back inside, left her feeling completely alone.

On the dance floor, a pair of heavyset women in jeans and plain white T-shirts blocked her view of Aurora, and she glanced back at the DJ swaying in her booth, so thin she looked more like she was about to faint than moving with the music. Why did Jesse come here? To go home with some random woman and squirm around until she and the random got off? Even that didn’t happen often. Cynical, Jesse.

“So what are we drinking?” Anna asked. “I’ll get first round.”

“I should go.” It would be better than watching Carlene shimmy those long legs of hers and cup Aurora’s sweet cheeks for another moment. She wouldn’t even get to spend some time chatting with her if she was getting serious with Carlene.

“Catch you later.” The cloud of cigarette smoke made her eyes burn, and the sooner she got outside, the better. With the hours she worked, what woman would want her anyway? Pushing through the crowd, Jesse lost sight of the pair on the dance floor. It was better, Ears ringing from the loud music, she palmed her keys and emerged into the salty air of early evening Long Beach.

Leaning against the wall, the muted bass thudding through the door, she drew in a deep breath and tried to steady her nerves. Weeks of trying to get up the nerve to ask Aurora out…while worrying about what would happen if the senior partners discovered her liking for other women. She’d already been taken aside by a concerned junior and reminded that the firm liked “stable” personal lives for their associates. Marriage, in other words, was highly recommended.

But that wasn’t possible—at least not in the foreseeable future. Another lawyer, a woman she’d gone to law school with, dated a few times back then, had been picked up by a big, conservative New York firm. They had stayed in touch and just last week she’d received a wedding announcement. Under the elegant, engraved script giving the details of the nuptials, she’d penned…he’s older and we have an understanding.

Her stomach turned. What understanding? No sex? Occasional sex? Was the guy impotent? She’d excelled at her course work and passed the bar with flying colors. And had to enter a fake marriage to make her worthy of the career she’d worked so hard for?

Another friend had married a gay lawyer friend. The small but respected Los Angeles firm accepted their sham, had actually encouraged it.

Why should hypocrisy be necessary?

Confessions From the Carnivore Club, Dave and Nancy’s Story

One Night on the Beach

The Virgin and the Playboy

The Virgin and the Best Man

Two Men and a Virgin